Key Questions for China Investors in 2015

In the first of a three-part series, Sinology answers some of the key questions investors should be asking about China in 2015.

China is complicated and raises many questions for investors. On the one hand, China’s economy is growing more slowly at 7.4% last year, compared to 7.7% for the two prior years. On the other hand, because the base was far larger last year, the incremental increase to the size of the economy was 100% greater than the increase a decade ago, when GDP rose 10%. This is why the International Monetary Fund estimates that China accounted for almost one-third of global growth last year. With inflation-adjusted income up about 7% in China, compared to 2% in the U.S., consumer spending is booming, up 11% vs. 2% here. Media headlines, however, continue to tell us that China’s economy is doomed.

This is the first in a three-part Sinology series designed to answer some of the most important questions about China’s economy. We address the impact of falling oil prices and the risks for deflation. We also consider the prospects of certain policy moves—cuts to interest rates and bank required reserve ratios—that have led to a booming domestic Chinese stock market, and conclude that those investors are likely to be disappointed.

The second part of this series will explore the reasons why the Communist Party is comfortable with slower growth, and just how slow a pace might be tolerable. This segment will also answer questions about the health of what has been the world’s best consumer story, and about prospects for further economic reforms.

The final installment will answer the question, is China’s property market heading for a crash? And it will discuss what we feel are the biggest long-term risks to growth and stability: an absence of the rule of law and trusted institutions.

Q: Will Falling Oil Prices Have a Big Impact on China?

No, because coal is still king in China, and accounts for two-thirds of the country’s energy. In fact, even though China is the world’s largest net oil importer, net oil imports equal less than 3% of China’s GDP.

Oil accounts for only 18% of the country’s primary energy consumption, compared to 44% for Japan, 40% for Korea and 37% for the U.S. Lower oil prices have contributed to lower fuel prices, delivering a modest contribution to lower headline consumer price index (CPI), but lower food prices (due to unusually mild weather and unusually low levels of hog disease) have had a much bigger impact. Moreover, households account for a relatively small share of China’s total oil consumption.

China certainly contributed to weaker global demand for oil last year, with its oil consumption rising by about 1.4% year-over-year (YoY), down from 3.2% growth in 2013. But most analysts agree that a big increase in oil supplies was the main factor behind lower prices.

Q: Does China Need to Worry About Deflation?

No, we don’t believe so. So don’t jump on the deflation bandwagon, and don’t expect significantly easier monetary policy.

CPI is low in China, but not unusually low, and this is clearly not due to falling aggregate demand. 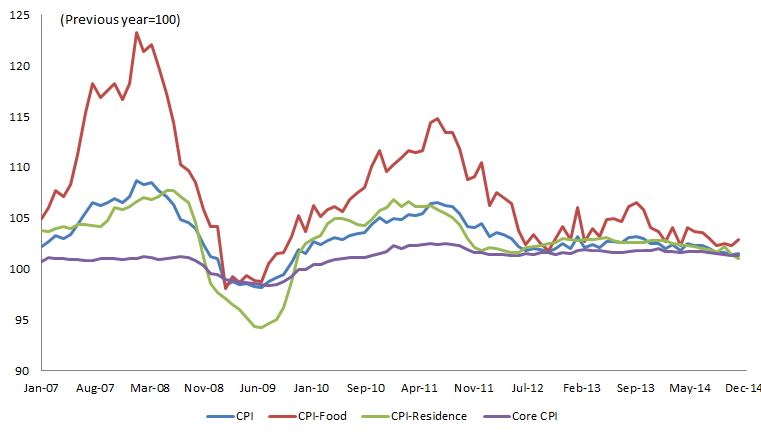 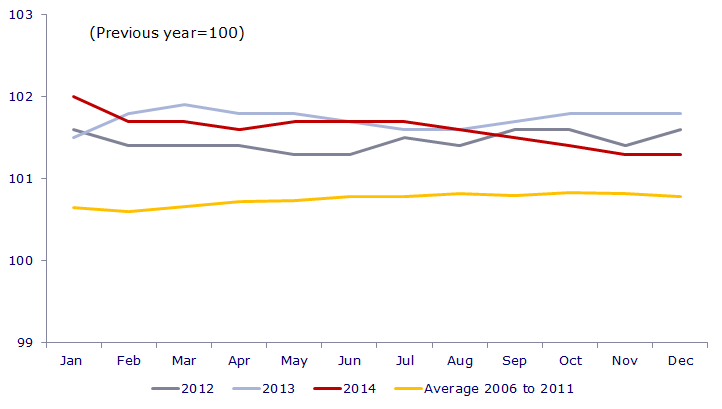 Some suggest that steep falls in China’s producer price index (PPI) mean China has a deflation problem. But, in my view, that is inaccurate, because it is clear that China’s PPI trends are closely tied to global commodity prices. In other words, falling China PPI reflects lower global energy and commodity prices rather than deflation in China. I believe many Chinese firms will benefit from lower input prices. 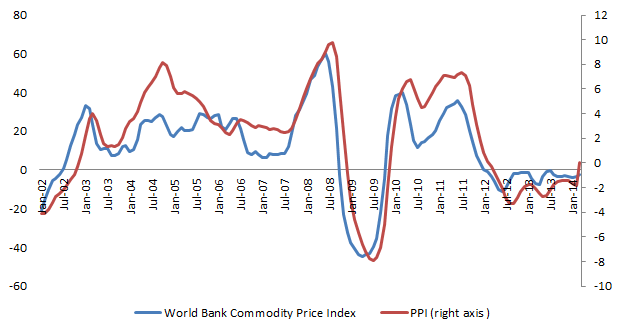 China may possibly cut interest rates, but such a move would not signal a shift toward a dramatic easing of monetary policy. China’s central bank understands that swings in food prices are the result of supply-side issues (recently, a low incidence of pig disease and moderate weather), not significant changes in demand, so the central bank (People’s Bank of China or PBOC) has not attempted to use monetary policy to intervene when food prices send CPI up or down. The PBOC does, however, typically adjust interest rates to keep pace with CPI.

As a result, we could possibly see one or two more cuts, of 25 basis points (0.25%) each, to the benchmark lending and deposit rates over the coming couple of quarters.

In my view, it is important to understand the Communist Party’s motivation for these cuts: primarily, to keep rates aligned with inflation, and secondarily, to take advantage of lower CPI to reduce borrowing costs for companies (including privately owned firms) and consumers.

It is very likely, however, that the Party will defer a rate cut out of concern that this step would be misinterpreted by investors, adding fuel to the already dramatic rise of the domestic A-share market. And the PBOC has adopted new tools for managing liquidity and reducing financing costs, such as pledged supplementary lending (PSL), short-term liquidity operations (SLO), standing lending facility (SLF) and medium-term lending facility (MLF). Odds are that the central bank will use these tools as they have the advantage of attracting far less attention from the media and investors than changes to interest rates.

Q: Why Did China Cut the Required Reserve Ratio (RRR)?

China recently cut the RRR, but not in order to boost bank lending. Cutting the RRR will have little concrete impact and will not, on its own, lead to more lending. Changes in the RRR are linked primarily to changes in foreign exchange reserves, for sterilization purposes.

RRR in a fake banking system

In a real banking system, regulators use the RRR to manage growth of lending and money supply. Banks only influence the supply of money in an economy when they lend, and a lower RRR raises the share of deposits that can be lent.

But China does not have a real banking system. All Chinese banks are controlled, via the personnel system (even down to the branch level), by the Communist Party. This enables the Party to set loan quotas for each bank, governing the level of lending above and beyond the RRR limitations. The system works, because any banker who ignored his quota would soon be unemployed.

Past RRR cuts, on their own, have not resulted in a material change to credit and liquidity because lending is controlled by the quota. I’ve seen no sign that the Party plans to raise this year’s quota, and loan growth continues to decelerate at the anticipated pace. Given that the Party seems comfortable with the fact that GDP growth is likely to continue its gradual deceleration this year, there is no reason to expect the Party to reaccelerate credit growth in 2015.

Back in 2012, when central bank governor Zhou Xiaochuan was asked at a press conference if the most recent RRR cut should be interpreted as government support for the equity and property markets, he said no. Zhou also explained that the RRR is primarily a foreign exchange sterilization tool “and in most cases, RRR adjustments do not indicate monetary policy is tighter or looser.”

This is consistent with comments from deputy governor Hu Xiaolian in 2011: “We need to point out that raising the RRR is mainly for offsetting the newly increased liquidity from foreign exchange inflows, and does not have a large impact on the normal availability of money to financial institutions. The general effect is neutral.”

[Note: Although I’ve been one of the few people arguing that RRR changes are not a big macro deal, I’m not the only one. Last June, UBS’ China economist Wang Tao wrote “…don’t count on RRR cuts to lift credit growth and have lasting positive impact on real economic activity.” In addition, a 2011 working paper from the Bank for International Settlements (BIS), written in collaboration with PBOC economists, explained that “an RRR hike itself does not necessarily imply a tighter policy stance, depending on the sterilization task and other policy actions.”]

So if RRR changes are not a reflection of changing monetary policy, why, over the last decade, has China’s central bank made RRR changes more often than most other central banks?

The BIS working paper explains: “. . . reserve requirements in China serve first and foremost as a tool to drain liquidity in the context of large-scale FX interventions.”

The cut to the RRR this month was appropriate simply because the growth rate of foreign exchange accumulation slowed significantly last year. Forex reserves increased by only US$22 billion last year, compared to an increase of US$510 billion in 2013, and US$130 billion and US$334 billion in 2012 and 2011. Moreover, forex reserves declined quarter-on-quarter during the last two quarters of 2014. The prior two cuts in the RRR came in May 2012, after two consecutive months in which forex reserves declined month-on-month (MoM), and at the end of November 2011, after the reserves fell MoM for two of three months. Not cutting the RRR when reserves are declining would represent unnecessary withdrawal of liquidity.