Dear President Biden: Getting America’s China policy right is important for building back our economy.

Getting your China policy right is important for building back our economy.

China drives global economic growth, so a sound bilateral relationship is important to American consumers and workers, as well as to families who are counting on stock market returns to pay for their retirement.

In the 10 years through 2019, China, on average, accounted for about one-third of global economic growth, larger than the combined share of global growth from the U.S., Europe and Japan. We cannot—and should not want to—decouple from this engine of global growth, as we manage the other aspects of the bilateral relationship.

Your advisors are in the midst of a comprehensive review of U.S. policy towards China. When you sit down with them in the White House, they will present you with their recommendations for managing one of the most important issues of your presidency. Understanding how that policy will affect Americans is critical, so before you make your policy choices, may I suggest that you ask your team the following questions (and I’ve offered some facts to consider as well). These questions are intended to help avoid some of the common misconceptions about the impact of U.S.-China engagement on American working families.

Q: What has been China’s impact on American jobs?

While some insist that China’s rise has had harmful effects on the American economy, the evidence shows that overall, economic engagement with China has been good for American employment. Some manufacturing jobs have been displaced by imports from China, but other manufacturing jobs have benefitted from lower-cost inputs from China as well as from exports to that fast-growing market. Trade is not the problem. Rather, our domestic policies have failed to adequately help workers who have suffered the negative consequences of change, whether due to imports or to technology.

At the same time, however, American manufacturing is very healthy. U.S. industrial output nearly doubled between 1980 and the end of 2020.

Returning to the impact of imports from China, a study by economists at the St. Louis Fed found that although those imports do cause short-term pressure, “manufacturing industries across U.S. states are better off in the long run,” and “the U.S. economy is better off, as it benefits from access to cheaper goods from China.”

It is also important to note that, according to Oxford Economics, exports to China—our third-largest market—supported an estimated 1.2 million American jobs in 2019.

Q: Has engagement with China been good for American consumers?

A recent study by Fed economists concluded that “U.S. consumer prices fell substantially due to increased trade with China,” and that “these price effects are particularly large in product categories selling to low-income consumers.” This has been critical while so many Americans are working and studying at home, as more than 90% of laptop imports have come from China.

A study by the Bureau of Labor Statistics found that a one percentage point increase in the share of imports from China leads to at least a 3% fall in U.S. consumer prices. A working paper by Fed economists agreed that “U.S. consumer prices fell substantially due to increased trade with China.”

The St. Louis Fed study we referred to earlier concluded that American consumers have “gained an average of $260 of extra spending per year for the rest of their lives, we estimated, all stemming from the increased imports from China.”

Q: Has engagement with China been good for American companies?

China’s entry into the WTO has also been good for American farmers, with our agricultural exports to China up over 1,000% since 2001, while farm shipments to other markets increased 130%. Last year, U.S. agricultural exports to China were up 91% YoY, while they declined 3% to the rest of the world. Almost one-third of the entire U.S. soybean crop is sold to China, as well as over one-quarter of our cotton crop.

Many of our companies have thrived by doing business in China, which is the world’s fastest growing consumer market. For example, Nike reported double-digit revenue growth in Greater China for 22 consecutive quarters prior to the COVID-19 outbreak. After a three-quarter pause due to the pandemic, double-digit growth resumed in the company’s quarter ending in November, 2020. Apple reported its highest-ever revenue in China during its quarter ending in December, 2020. Last year, GM again sold more cars in China than in the U.S. And China is especially important to the U.S. semiconductor industry, accounting for about 26% of Intel's global revenue, 55% for Texas Instruments and 60% for Qualcomm.

Q: But, isn’t the theft of intellectual property a huge obstacle for American companies?

Theft of intellectual property (IP) is a concern for many American companies, but there has been meaningful progress over the last decade.

As Chinese companies have moved up the value chain, the need for stronger legal protection of their own IP has driven change, and this has also benefited foreign firms.

Over recent years, the Chinese government has made significant improvements to its framework for protecting IP. All major IP laws have been amended, and the results have been positive for American companies. In software, for example, Microsoft has won all 63 of the copyright infringement cases it brought in Chinese courts, and Autodesk won all 10 of its cases. China established special IP courts in a few cities, and in Beijing, foreign plaintiffs won all of the cases they filed the first year of the court’s operation. Across all of the IP courts, as of 2019, foreign firms had higher win rates and average damages than Chinese firms. In civil cases between Chinese and foreign firms, the foreign party won 68% of the time.

Between 1999 and 2019, royalty payments by Chinese companies to American firms rose by 24 times, far faster than the pace of China’s economic growth. 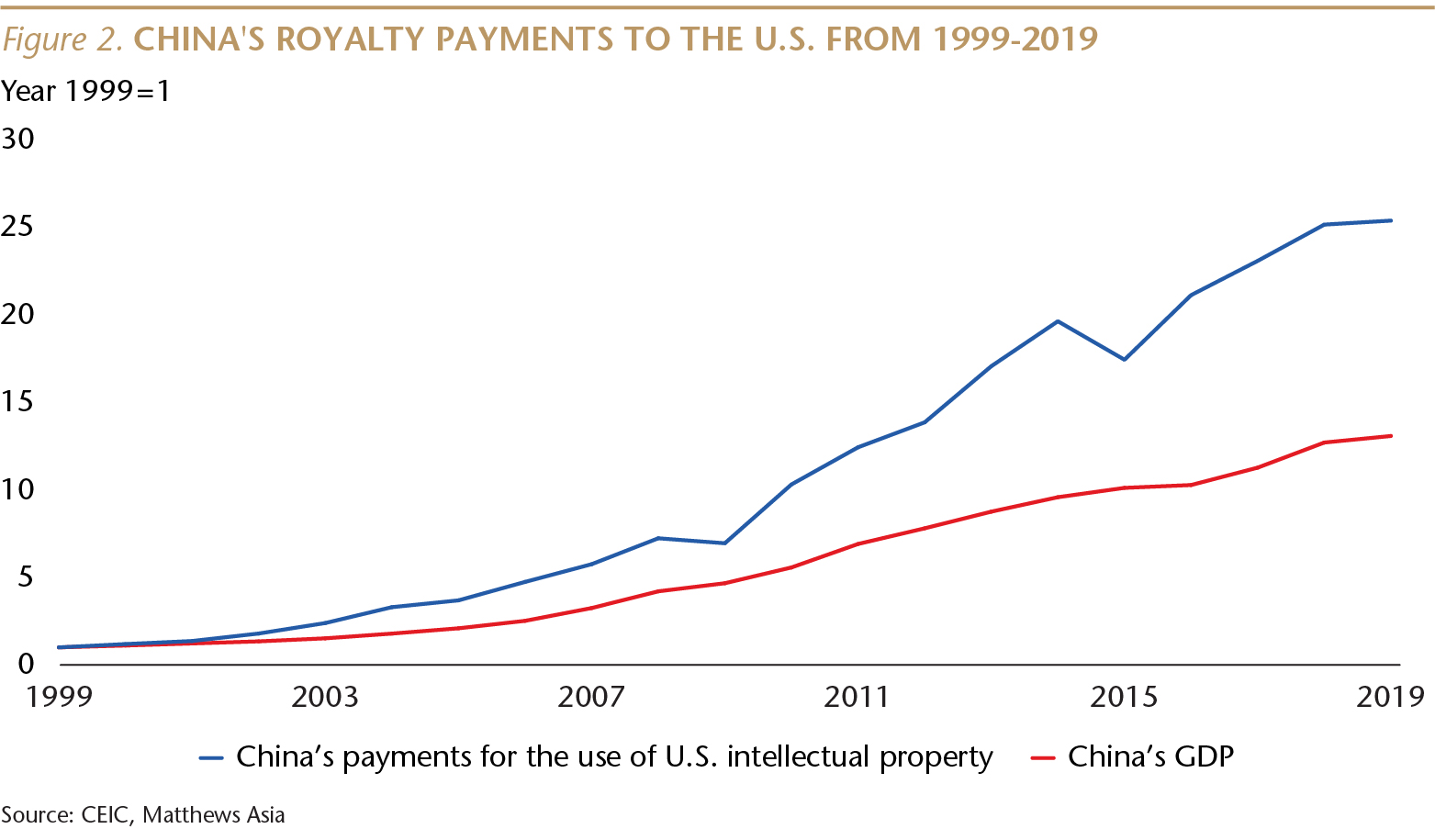 The American Chamber of Commerce in China recently surveyed its member companies, and only 3% reported being forced to transfer IP or technology “due to informal pressure from business authorities.” Only 17% of companies said lack of sufficient IP protection was a barrier to their innovation in China, down from 26% in 2019. Sixty-one percent of American firms in China said IP protection improved in 2020, up from 37% in 2016, according to surveys by the U.S.-China Business Council.

Q: Are the Trump tariffs on Chinese imports good for American families and companies?

The previous administration raised tariffs on Chinese goods by more than six-fold, leading to huge losses for American consumers and companies, but with little impact on China.

Multiple studies have concluded that Americans—not Chinese companies—are paying the full cost of these tariffs. One report, by economists at the Fed, Princeton and Columbia, found that “the full incidence of the tariff falls on domestic consumers, with a reduction in U.S. real income of $1.4 billion per month by the end of 2018 . . . with no impact so far on the prices received by foreign exporters.”

The Congressional Budget Office has estimated that the tariffs are “projected to reduce average real household income by $1,277 (in 2019 dollars) in 2020.” That comes close to wiping out the most recent stimulus check to one household member.

None of this should come as a surprise. When IMF economists looked at experiences in 151 countries between 1963 and 2014, they found that

“tariff increases lead, in the medium term, to economically and statistically significant declines in domestic output and productivity. Tariff increases also result in more unemployment, higher inequality, and real exchange rate appreciation, but only small effects on the trade balance.”

It’s also worth noting that the tariffs did not put pressure on China’s exports, or on policy-makers in Beijing. Despite the tariffs and political tensions, the share of manufactured goods imports coming into the U.S. from China last year returned to the historical high of 22%, last reached in 2016. In addition, China’s share of global exports hit an all-time high of over 14% in the first three quarters of last year.

Our continued economic engagement with China, including bringing them into the WTO, has facilitated dramatic structural changes which have benefited the average Chinese citizen.

China has become entrepreneurial. When I first worked in China during the early 1980s, as a very junior American diplomat, there were no private companies. But small, entrepreneurial private firms now account for almost 90% of urban employment and all net new job creation.

The extent of private ownership in China may surprise many Americans. A recent study published by the National Bureau of Economic Research found that in 2019, individuals owned 69% of registered capital of all Chinese companies, up from a 52% share in 2000.

Since China joined the WTO in 2001, per capita household income rose by 403% in real (inflation-adjusted) terms. As a result, spending by Chinese consumers—which was equal to only 15% of U.S. retail sales in 2001—is now equal to 88% of American consumer spending. China is the world’s best consumer story, and many American products are thriving there. Last year, our exports to China of livestock and meat rose 61% YoY by value, making it our second-largest market, and those shipments are up 556% compared to 2001.

Most Chinese lead a healthier life, and their children have far better access to education. In addition to a better standard of living, most Chinese citizens also enjoy far greater personal (although not yet political) freedom. The absence of political rights and the rule of law in China are serious long-term problems, but its citizens have the freedom to run their own lives to a degree that was unimaginable just 25 years ago.

Of course, not all Chinese have been permitted to enjoy these new freedoms. Mr. President, I share your frustration over the limitations of engagement in achieving our objectives with the Chinese government. But we need to be clear about what has been accomplished, and realistic about whether alternative policies will achieve more, or less.

Mr. President, you recently said that our foreign policy must be conducted “with American working families in mind.” I think that continued economic engagement with China, based on a level playing field for our companies, supports your objective of our domestic economic renewal.

You also said that “when we invest in economic development of countries, we create new markets for our products and reduce the likelihood of instability.” Working with our allies and partners to update the global trade and financial architecture we designed decades ago, and continuing to incentivize the Chinese government to abide by these rules, is the best way to earn back our leadership position and reduce the risk of conflict between the world’s two largest economies.

Despite gloomy news out of China, Andy Rothman explains why he remains optimistic about China’s road ahead.

In our latest issue, Andy Rothman discusses how last year’s experiences can help us plan for China’s 2022 economic prospects.

In this video, Andy Rothman explains why China’s 2022 investment environment will be defined by two competing weather patterns.